The southern region of the Telo Islands has an abundance of high-quality Sumatran waves to suit all levels of surfers from beginners to experienced or professional. “Monkeys” is the go to wave in the area because of its consistency and its appeal to all levels.

It is the swell magnet for the region so if there’s no swell at Monkeys, there’s unlikely to be any swell anywhere. On the Monkeys point, there are 4 right hand breaks: Monkeys, Coffins, New School and Outer Monkeys. When a medium swell is running all 4 breaks will be pumping.

The Telo Islands –called pulau pulau batu on local maps– lie about 150 miles offshore the Sumatran coast. They are nestled in between the world-famous surf destinations Nias and Mentawai Islands, just north of the Island Siberut. The archipelago itself consists of more than 100 islands

The Telo Islands can produce world-class surf even in the off-season December through April. Beginning of May longer period S-SW swells start to hit the islands groups. The breaks in the Telo Islands fire very consistently during July, August and September. In this time of the year hardly a day goes by where there is not a good wave to be surfed.

There are around a dozen quality breaks surfed on a regular basis by the guests of Monkeys Resort.

Our surf package consists of unlimited surfing!   Jump on one of the 2 resort speed boats to one of a dozen breaks within a short boat ride of Monkeys Resort or surf our namesake wave Monkeys a super fun right hander at our front door.

To optimise your experience at Monkeys Resort we have limited the number of surfers at the resort to 12. 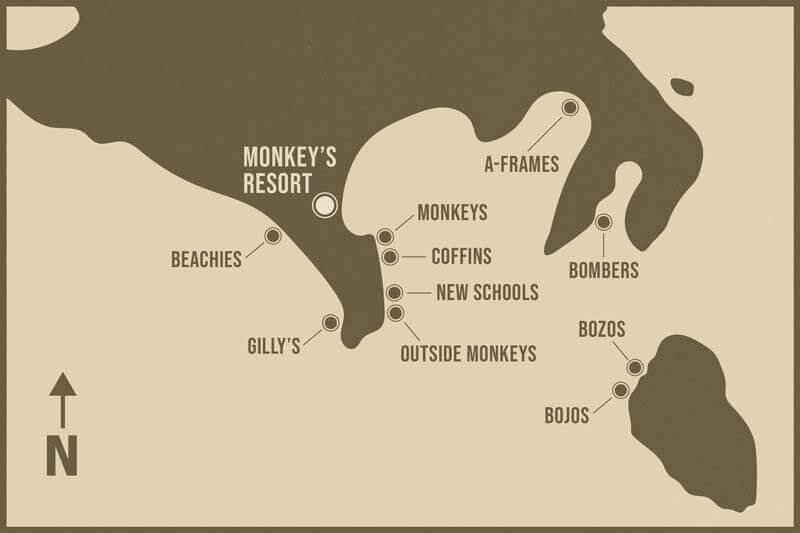 Get To Know Our telo Surf Spots

This right-hander can be seen from the resort and caters for all surfers. It’s regarded as one of the most consistent waves in the Telos’ and breaks year-round. Monkeys offers a little bit of everything; open faces for multiple turns and airs (if you have your pilots license), barrel sections at the take-off, a middle shelf offering some stunning chandeliers and a juice bottom section with unlimited options. Best surfed early mornings and late afternoons, it hosts some amazing sunrises and sunsets with picturesque palm tree backdrops creating an all-round amazing surfing experience.

Catering for advanced surfers seeking a rush, this is a fast right-hand barrel that breaks on a shallow reef. As its name suggests, once you are locked in your options are limited; either you’re on your way to an early death, or you will disappear and rise from the pit of a deep grave. If you’re lucky enough to score this wave bring a change of underwear, you’ll need it.

New Schools is a short right-hander that packs a punch. When it’s not barreling it offers meaty open-faced sections to slice into. The wave is fickle and works on specific conditions, but that just makes scoring it all the sweeter.

A powerful right-hander that handles bigger swell, Outer Monkeys is a high-performance wave that breaks on flat reef framed by square shelf. On the right tide, it delivers round barrels all the way along the reef, otherwise, it stands up tall with wide-open faces. Be sure to have your step-up handy because it handles double overhead and you don’t want to be under-gunned.

Situated in close proximity to Bojos, Bozos is another left-hander with lots to offer. It breaks in front of a reef shelf with a backdrop of coconut trees, making it an idyllic set up.  It is a fickle wave, but for good reason. From the take of it breaks heavy and fast then it slows down to allow for loads of turns on any of its multiple sections.

A left-handers paradise. It breaks out the back on a distinct boil and runs down the point over multiple shallow ledges. Get the right wave and all the reefs link up for a lengthy ride. The reefs are shallow which makes for fast sections and the occasional barrel. Be sure to have your wits about you as the inside breaks on near dry reef. Fortunately, the reef is flat and forgiving so casualties are a rarity. Bojos picks up heaps of swell so, as long as the wind is favourable, there is always a wave to be ridden.

A high-performance barreling right-hander that breaks on a shallow reef. It breaks fast and heavy with a consequence but offers two amazing barrel sections. Off the take-off it jacks up quickly, readying itself for the first barrel bomb. Mid ride it walls up nicely with the opportunity to get in a quick couple of snaps or just ready yourself for the second bombing barrel section down the bottom.

There are plenty of other secrets spots we would prefer not to name.

We have a range of non-surfing activities to keep the whole family entertained for the entire trip.

The resort has permanent surf photographers onsite ready to document your epic waves!

Getting to the waves each day has never been more comfortable or faster on one of our resort boats.

Get the resort exclusively
for your group

Monkeys Resort Ⓒ 2023 - All Rights Are Reserved. Design by MilkyWay

Send us your details and we will reach you soon.

Book 8 surfers and get the resort exclusively for your group.

Send us your details and we will reach you soon.

We will get in touch with you soon.